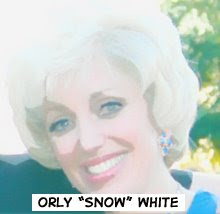 CAROTID - Nestled in the mountains on the edge of Transylvania, lies the duchy of Birfistan. On the outskirts of the capital city of Carotid, sits a foreboding castle. At night, strange sounds can be heard coming from the top level. Whenever a visitor asks any of the town folk about the castle, there is a sotto voce reply: "It's really an asylum," before hurrying away.
For in this castle lives Orly "Snow" White, and the Seven Dwarfs. They are:
.
-Bergy: florid, bearded, ill-tempered
-Puzy: always rumpled, took Grumpy's place after he was found in the Delaware River
-Donofry: lost everything at poker, works in the castle's OT shop
-Swensy: high strung, but hides it by acting dopey
-Schulzy: a dwarf from upstate New York
-Ritzy: a dwarf from Oklahoma, spends his day demanding IDs from everyone in proximity of the castle
-Cooky: was in Birfistan's armed forces, until a breakdown
.
Overseeing all of these denizens, and the castle itself, is of course Orly "Snow" White. She once was a dentist, lawyer, and real estate agent until the breakdown on international television. She hasn't been seen in public since.
.
So if you take the weekly Lockheed Constellation flight to Birfistan, the same airplane Ann Dunham took to Kenya in 1961, be sure to walk cautiously if you approach the castle. Ritzy will run up to you, demanding to see your birth certificate. Act with pity; he's unhinged.
Posted by misha trotsky at 12:38 PM