O'Donnell in 'The Aristocrats'? 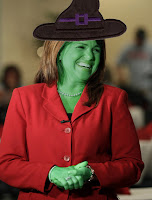 NEW CASTLE - Fresh on the rebound from her defeat by Chris Coons, Christine O'Donnell may be appearing in the Delaware Mountain Community Theatre's production of The Aristocrats.
.
"I know I have spoken out in the past against pre-marital sex and masturbation, but I really need the money" she said, explaining the complete reversal of her fervently held and well known religious beliefs. Christine O'Donnell has gone from Catholic to Wiccan to fundamentalist, back to Catholic, and now Rastafarian. "God always provides a way out," Ms. O'Donnell said.
.
O'Donnell's physical attributes have been well publicized, having been graphically described and read about, by over 1,216,553 people. "If just a teeny fraction of those one million readers buy tickets, it will be a success, and worth it," Ms. O'Donnell said.
.
The remainder of the cast is still being auditioned. Casting calls are being held at Biker Joe's Lounge, in Newark.
Posted by misha trotsky at 12:25 AM

The offer to pose for Playboy is coming any minute now...